Could we get information from you about Zeve Lighting Design Studio?

We established Zeve Lighting Design Studio as a company focused on creative and integrated solutions in lighting design and since then, we have completed many projects in different scales in the private and public areas. We believe in the transforming power of the light and use this power artfully to create aesthetic and impressive living spaces. We have produced a wide range of lighting design projects such as interior, exterior, landscaping and urban living areas, historical and cultural buildings, healthcare facilities, stadiums, bridges and road lighting.

What are your considerations when you design lighting?

If we are talking about the visual and architectural context, I can say that I pay particular attention to spatial and psychological factors in the design process. What I mean by the spatial factors is to be able to describe the space and create satisfaction and pleasure in the users of it. For this, first of all, it is necessary to create an aesthetic order and harmony which is suitable for the architecture and complementing it. In addition to these steps, visual attraction areas are created by light effects. Surely, I must say that visual comfort is one of the most important criteria in all these plans. Therefore, products whose light emission does not disturb the eye should be preferred.

One of the most important issues I pay attention in all of our projects is, of course, energy consumption, which must be kept at the minimum level in accordance with the international energy codes. Let’s talk a bit about the art of lighting design…

Light is an indispensable part of the universe. It is everywhere, it is transient and mystical. For this reason, it is a powerful tool for awakening the senses, telling stories and expressing the emotions. I mean, the light is already creating art with the features that exist in itself. This creative potential of light has actually been known by people since the beginning of the art history. However, the term “art of light” was first introduced in 1930 by Moholy-Nagy’s creation of kinetic light art called “Light-Space-Modulator”.

However, if we think of “art of light” not only just as an art movement, but also as an art discipline in which light is a creative tool, we can say that the cave paintings of forty thousand years ago are the first works of “art of light”. Most of the cave paintings depicted animal movements and they were not static pictures. So they showed countless variations of the same object, for example a horse and they were turning into streaming images under flickering fire. Inconsistent glows of fire in a moving hand and rapid changes in the glow create a feeling of a moving painted object. This kind of understanding of light and its perceptual potential places these cave paintings under the disciplines of the art of painting, the art of installation, site-specific art, and the art of light, doesn’t it?

When we come to the 15th century, we see Leonardo da Vinci examining the light both as an artist and as a scientist. He studied on various disciplines such as astronomy, physics and optics which describe the anatomy of the human eye, the nature of light, and the dark room mechanics. And he applied his scientific researches on the light in the artistic innovation, which is evident when his paintings are examined. For example, his painting called “The Last Supper” is known as a groundbreaking work of light and perspective in the two-dimensional art. Da Vinci is known for his talent to create illusion of three-dimensional form and pioneering “the art of light and shadow” techniques who explicitly applied light and shadow contrast in painting, drawing or printing.

The “light shadow technique” (chiaroscuro), which was further developed by Michelangelo in the 16th century and perfected by Rembrandt Harmenszoon van Rijn in the 17th century, has been also applied in other branches of art, including photography, cinema and theater.

Sven Nykvist, the cinematographer, addressed the emotion of “meaningless existence” by contrasting the light and shadow in a dramatic image in “Winter Light”, a film of Ingmar Bergman produced in 1962.

Today, Olafur Eliasson applies similar techniques while working on the balance between light and darkness in the art of installation. In his work ‘Beauty’, he created an artificial rainbow for a short time, depending on the observer’s point of view and the condition of the fog while he was sparkling a prism of full-spectrum light in a completely dark room filled with fog.

There is a characteristic that exists in the essence of the light and light is a complex tool that behaves different depending on space and time. Therefore the light reveals not only the things about the objects you look at, but also it becomes an inspiration in itself.

The interaction of darkness and light has been a theme worked on from Greek and Roman sculptures to the Renaissance paintings and the experimental films. Contemporary art of light begins with the development of the electric light in the end of the 19th century. Therefore, light has been used not only as a tool for other forms of the art but also as an art of the main medium of expression. Experimentation and innovations in theatrical light have often influenced other areas of light use such as light art. Light art is applied as a discipline in many disciplines such as painting, cinema, and installation art. With this difference, we are able to obtain holistic information about the light.

Light has been used as an architectural effect throughout human history. The relationship between light and architecture emerges inevitably, sometimes consciously, sometimes unconsciously. The art of touching with the effects of light is often used in architecture and depending on how it is used, it can transform the spatial context, creating agreeable or disagreeable, sublime or mysterious sensations, the sensations of enlarging a space or making it smaller, or simply highlighting aspects of the space that interest us. And as with good architecture, good lighting illuminates, clarifies, stimulates. Bad lighting, like bad architecture, dazzles, confuses and creates weariness. 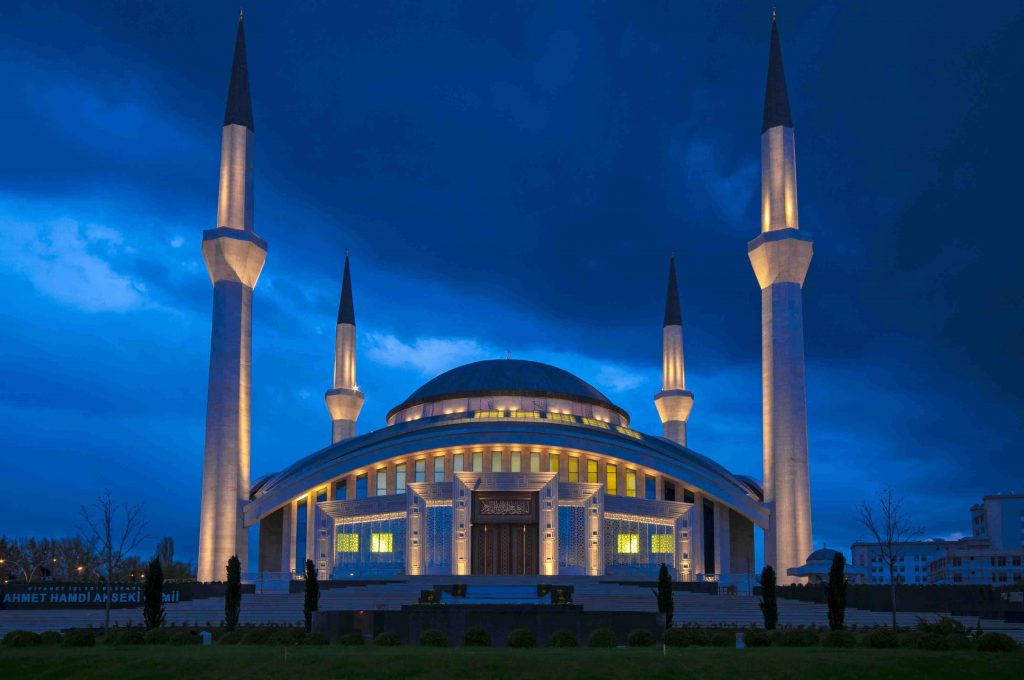 The lighting design of Kırıkkale Nur Mosque project had a broad repercussion in the international media. Can we talk about the process of this project?

In 2007, during his visit to Kırıkkale, Mr. Recep Tayyip Erdogan, the Prime Minister of the period, proposed a large mosque in the classical Ottoman style, which would be the symbol of Kırıkkale and meet the needs instead of the old mosque. The Directorate of Religious Affairs decided to build a monumental masterpiece together with its social complex as a symbol of the city in the location of the old mosque.

Lighting design work began in the last quarter of 2012, and an intense and rigorous work continued until the design process was completed. Throughout the process, many issues were discussed in detail from the concept of design to assembly and the application details.

What we did was exactly an application of light art in architecture. The understanding of design was built on both expressing emotion by light and emphasizing architecture by light effects. Of course, it was the spiritual feeling that we tried to create and express. The intention of the lighting applications on the architecture was to emphasize the main architectural elements, to add depth to the construction by using light and shadow interaction and to create a visual hierarchy with different shades of different light. Thus, the structure would have participated as a symbolic work in the night silhouette of the city.

Light color shades, technically speaking color temperatures, have been carefully selected to provide fine transitions between complex surfaces that go on from bottom to the top. While the main dome was illuminated with warm-white tones, the dome windows and the main pillars were illuminated with hot-white tones. It was intended to get a mystical look and contrast in many different points throughout the structure by choosing super-hot white tones on the other surfaces.

As I have already pointed out, the good application of light and shadow contrast reveals the three-dimensional form of the structure and adds mystery to it. In our implementation in Nur Mosque, we attracted the attention to the main dome by leaving the quarter domes in the shade. The ornamental windows under the dome were made clear. Large windows were illuminated by narrow-angle light beams to create sharp dark surfaces between them. It is also necessary to provide harmony between illuminated surfaces. We provided this balance with different optics and the lights in different powers.

In the jury evaluations of our international achievement that we had with Kırıkkale Nur Mosque, it was stated that the contrast was just right and effective, the dark and illuminated surfaces were chosen properly, the selection of shades of light was very good, architectural features were emphasized effectively and there was a sensitive balance in the design.

How do you evaluate the lighting design perception in Turkey in general?

We cannot say that the lighting design as a discipline is sufficiently widespread or adopted in Turkey. The reason for this is that there has not been a serious demand in this issue yet. In other words, the investors and the parties of the topic are not familiar with the subject. However, lighting design is considered very important especially in America and Europe. Almost every project has a lighting designer and/or consultant. And beyond what is discussed on lighting in Turkey, many sensitive issues are discussed there, such as the effects of lighting on people’s circadian rhythms.